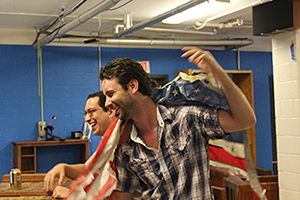 The Acting Bug first found Alex in elementary school when he played a Munchkin in The Wizard of Oz. In high school, Alex discovered the feel of a real stage by acting in numerous plays. His portrayal of Edgar Allan Poe earned him Best Actor award for the 1999 season.

With his passion for acting ignited Alex enrolled in The School of Theater and Dance at the University of Florida where he was awarded Best Supporting Actor for his work in The Laramie Project.  At UF Alex’s film career started with commercials, student films and an independent feature. He earned a BFA in Theater Performance graduating with Honors.

Interested in broadening his experience Alex set out upon the world for extensive travel through Central America, Europe and Asia.  In Ukraine he found work in commercials; in Bollywood he worked in soaps, commercials, and voice-overs.

Upon his return to the United States Alex has been actively working in film, television and commercials. His passions wedded with his skills and training keep him working in a career he loves where he can touch, move and inspire his viewers and fans.